As a child growing up in a suburb of Atlanta, Bryan Shepherd would begin most days before the sun was even up.

“I lived in Decatur, Ga., which was about 30 to 45 minutes away from my elementary school,” Shepherd notes. “Me and most of my friends were in a majority-to-minority (M-to-M) program that allowed us to go to more academically robust schools in the county. We would wake up sometime around 5:30 or 6 o’clock in the morning, we’d take a bus to school and get back home at like 6 o’clock at night.”

The experience was challenging, Shepherd recalls, but it was also an opportunity — one that helped him develop the grit and determination that would carry him through the rest of his educational and professional life. It was also the first of many experiences that instilled in Shepherd, who was a first-generation college student, both the value of education and hard work.

Now an MBA candidate and Consortium fellow in Emory University’s Goizueta Business School, Shepherd largely attributes how far he’s come to his upbringing. Growing up, his parents helped foster his innate curiosity and desire to learn and instilled in him the importance of education and a strong work ethic.

With the knowledge and skills cultivated in him by his mother beginning at a young age, Shepherd developed exceptional test-taking abilities, which helped him get into elementary and middle schools for high academic achievers. Once in high school, his athletic ability helped carry him through to college.

“Unfortunately, my GPA in high school wasn’t incredible, but earning a football scholarship allowed me to go to college, gave me a way to pay for it, because it would have been pretty tough,” he says.

That is how Shepherd ended up at a private liberal arts institution in the small town of Clinton, S.C., where he studied psychology and political science and was part of a class comprised of only 6 percent black students.

“That was a culture shock for me,” says Shepherd. “My parents invested a lot in making sure that I had a good education, but getting to college, there was nobody to talk to, and I couldn’t really talk to the counselors about some of the issues I was facing as one of the only black kids in the school.”

While the experience tested him, Shepherd says it also exposed him to different types of people and prepared him for professional life. “I think it taught me a lot about the world, and it gave me some tools to handle a lot of the situations that I’ve encountered in my career,” he explains. “I think being in Atlanta sometimes was being in a fairy tale; having principals and bosses who always looked like me wasn’t always the most realistic way that I experienced life.” 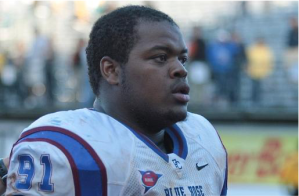 Following college, with little prospects and his father sick at home, Shepherd took a job at a dermatology office in Atlanta making $13 an hour. “I was just focused on trying to bring some money back into the house and help out with the bills,” he says.

The job — located in what Shepherd refers to as “the Beverly Hills of Atlanta” — involved working with very wealthy clientele. The experience forced Shepherd to learn how to deal with many different types of people and helped him further improve his communication skills. At the same time, his flame for psychology continued to burn. However, he did not want to go the traditional route.

“I knew that I had the potential to do more than that, and I had this innate kind of curiosity about people,” says Shepherd. “As a kid, I was always interested in why people think the thoughts that they do — why do I think the thoughts that I do? When I went to school, I was able to take a few courses on industrial organizational psychology, that more business-focused assessment and understanding of people, trying to understand employee engagement. I thought that was a really interesting challenge. I had this psychology background, and I wanted to apply it to business.”

Shepherd applied and was accepted into the master’s in applied psychology program at the University of Southern California (USC). Six months later, he was on the path toward pursuing his dream, living in Nashville and working for a small boutique consulting firm, IQTalent Partners, after being recruited by an old football teammate. His excitement over landing the opportunity, however, was quickly overshadowed by his father’s sudden passing.

“I moved up to Nashville in November of 2015, and at the end of the first week of me working in Nashville, my father passed away,” Shepherd says. “That was a life-changing experience; your life’s never the same after you have a parent pass away. So, I took some time working through depression, and I immersed myself in my work. I was working upwards of 55 or 60 hours every week.”

With the time he put in and the skills he gained being client facing at IQTalent Partners, Shepherd made the jump to Korn Ferry, the largest executive search firm in the world by revenue, where he was able to dive deeper into the consulting side of the business. In charge of hiring for a large number of Fortune 100 companies, Korn Ferry took a solutions-based approach to hiring, Shepherd says. “It was ‘We have a problem, how do we solve it?’”

At Korn Ferry, Shepherd flourished, and although he was hired as a recruiter, a role in which he worked with clients to attract and retain diverse talent, it didn’t take long for him to advance.

“Within about one year, I was able to earn a skip-level promotion, so I skipped over the senior recruiter role and became the managing associate, which is someone who manages engagements and leads client teams,” says Shepherd. “I had a team of recruiters who reported to me, and I was the person who would meet week after week with the client and walk them through any issues; I was their point of contact. That was a pretty cool accomplishment for me at 27. I was pretty proud of that.”

It was also at Korn Ferry that Shepherd began to lean into his belief in the power of business to change society for the better. He proposed and led the development and execution of a mock interview program for underserved minorities in the Atlanta community, through which Korn Ferry was able to share its learnings from working with prominent, publicly traded corporations.

“It was never missed on me how much my parents invested their time and their effort into making sure that I had those opportunities.”

“I said, ‘We work with all of these companies. We know what skills they want, we know what technical backgrounds they’re looking for, and we know what they mean when they’re asking interview questions,’” says Shepherd. “‘We can help people decode that process.’”

Two-hundred people participated in the initial program, and before COVID-19 hit, Korn Ferry had plans to scale the program to all of its offices. “It was so fulfilling to be able to work with a group of people that are incredibly talented but maybe don’t see value in themselves,” says Shepherd, who received the 2019 Spirit of Atlanta Award, in part, for this work.

It was this drive to have a positive impact that ultimately inspired him to get his MBA, which he will begin working toward this fall. However, business school wasn’t always his first choice.

“I knew that I wanted to understand how to apply psychology to business, and I thought that getting a doctorate in industrial organizational psychology might be the right path,” Shepherd says, adding that a discussion with one of his master’s program professors shifted his thinking. “She mentioned to me that she has a PhD and that she consults with a lot of businesses, and there’s a perception that because she has a PhD, she only knows theory. She said that if you want to be a consultant or work in business, it may be better to get your MBA. That really switched my focus and let me know that for the impact I wanted to have on society, an MBA might be the best route to do it.”

A connection at The Consortium corporate partner Danaher Corporation — with whom Shepherd had worked at IQTalent Partners — had told him about The Consortium, and Shepherd loved how the organization’s mission aligned with his own goals. Short term, he wants to be a management consultant, but ultimately, he would like to start his own private equity firm “that will invest in underrepresented minorities to help grow and scale their businesses,” Shepherd notes.

It’s also important to him to give back in other, more immediate ways, to help young people not unlike himself see their own potential. Coming from a background with two supportive parents who were never able to go to college themselves but instilled in him the power and importance of education and hard work, Shepherd is fueled by these values, which he, too, hopes to impress upon others.

“It was never missed on me how much my parents invested their time and their effort into making sure that I had those opportunities. Having that familial support and somebody to give me those values, that’s privilege,” he says. “Just understanding the doors that were open to me simply because I had a piece of paper and a degree was huge.”

In addition to his parents, Shepherd attributes his success in life to his ability to turn the challenges he’s faced into opportunities to grow as a person and professional — and he encourages others to do the same. His advice: Value the work you’ve had to do to get where you are.

“Think back on some of the adversities you’ve faced, and take pride in the grit that it took to get to this point,” Shepherd says. “Lean on your experiences, value the stuff you’ve already done — even if it’s not getting into Yale or Harvard. For a first-generation student, you’ve had to navigate college, you’ve had to navigate with very little help oftentimes. That’s incredible. Don’t forget to see value in the stuff that you’ve done.”